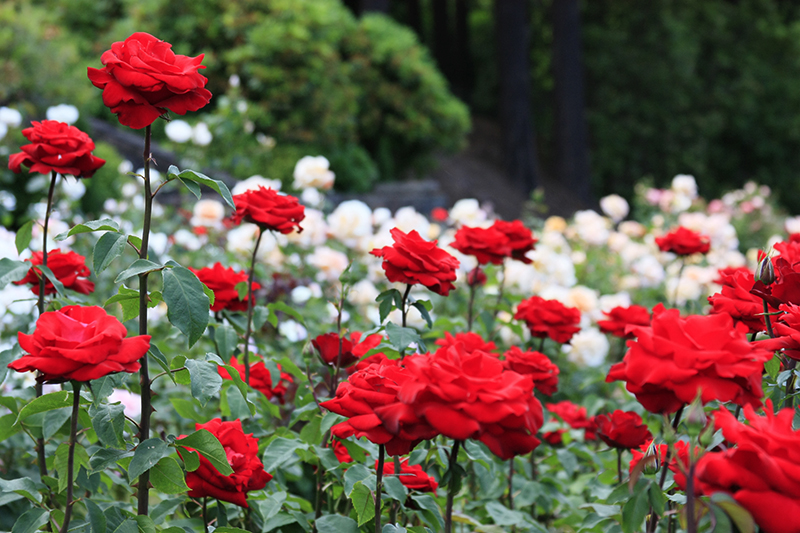 The International Rose Test Garden is a 650-acre property located in Washington Park in Portland, Oregon. It is home to more than 10,000 different varieties of rose bushes. The garden is a beautiful spot to take a walk in during the spring and summer, with roses in bloom from April through October. Peak bloom time is June. The International Flower Show is held in June, and is the perfect opportunity to see the garden in bloom.

The International Rose Test Garden began in 1918. It was founded to save English roses during World War I. The gardens feature a large assortment of cultivars, colors, scents, sizes, and flowers. Each rose is unique, and each one has its own distinctive character. Whether you are a first-time visitor or a seasoned gardener, you’ll find plenty of beauty here! From the top of the hill, you’ll have a breathtaking view of the entire rose garden.

The International Rose Test Garden Portland Oregon is a beautiful and enchanting place for rose lovers. This botanical garden is 4.5 acres (14,800 m2), with a gazebo overlooking the Willamette River. The center aisle is lined with award-winning miniature roses from the AGRS miniature rose test program. The gazebo, built in 1991, and a wall of honoring past Presidents of the Portland Society are other notable features of the grove.

The Portland Rose Garden is divided into three sections: the Shakespeare Garden, Miniature Rose Garden, and Royal Rosarian Garden. Each garden has a unique history. The Rose Test is dedicated to English roses and has a secret society that celebrates each variety with a stone bench. This group of gardeners was responsible for the creation of the International Flower Show. In the last year, a shady garden was added to the park to protect the roses from the elements.

The International Rose Test Garden is a historic site that is dedicated to the preservation of English roses. The garden was established in 1917 and has been around ever since. It is the oldest public rose garden in the United States. With over 700,000 visitors per year, it is one of the most popular places to see roses in the Pacific Northwest. There are also several paved walking paths that are accessible from all parts of Portland.

In addition to the historic gardens, the International Rose Test Garden is a popular destination for rose lovers. It was first established in 1917 as a sanctuary for European-grown hybrid roses during World War I. Today, it is the oldest continuously operating public rose test garden in the United States. The International Flower and Rose Test Garden in Portland Oregon is a great place to enjoy a picnic. You will be amazed by the many different kinds of flowers and the variety of colors.

Originally established in 1917, the International Flower and Rose Test Garden has grown in size and popularity since its inception. The garden was founded to protect English roses from being destroyed during World War I. The garden has many different cultivars and flower types, and visitors can appreciate the diversity of the flowers and their distinct characteristics. From the top of the hill to the back of the garden, the International Rose Test and Display Garden is a must-see destination for rose enthusiasts in the Northwest.

The International Rose Test Garden is the oldest continuously-operating public rose garden in the United States. It covers about four and a half acres (18,000 m2) and features a variety of blooms and a gazebo. The gazebo was added in 1991, and a wall honoring past Portland Rose Society presidents can be found on the garden’s hill. It is also home to numerous roses. There are many different varieties and the best ones are in Portland.

The International Rose Test Garden Portland Oregon is the oldest continuously operating public rose garden in the United States. It is located in Washington Park and contains more than 550 varieties of roses. You can even buy a rose gift at the Rose Garden Gift Shop. The gardens are not only beautiful, but they are also a fun experience. Visiting the International’s Rose Test and Display Garden is a must for any rose lover.